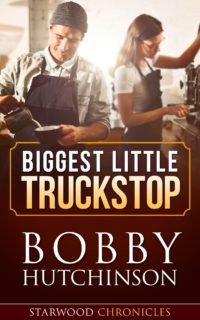 It’s a small town. She’s broke, and she’s running from a stalker. He’s losing his restaurant. Mac and Kate both have secrets. When Kate and her small daughter Susie blunder into the town of Starwood and Mac’s peculiar Truckstop, the attraction is mutual, but Kate can’t figure Mac out. To say he’s eccentric is an understatement. And Mac, smarting from recent heartbreak, has vowed to keep to himself. If you like unusual characters, sweet romance and small town nosiness, you’ll love Biggest Little Truckstop, Bobby Hutchinson’s short series starter for Starwood Chronicles.