ARE YOU LONESOME TONIGHT? 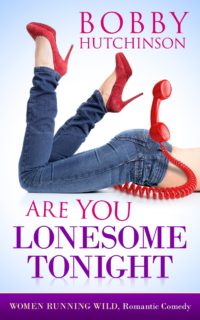 DOESN’T EVERY WOMAN HAVE A SEXY ALTER EGO??

Left pregnant and penniless by a lying, conniving scoundrel, Maxine Bleckner has found an unorthodox way to support herself and baby Graham. Her alter-ego, India Mcbride, is excellent at phone sex. It pays the bills–at least until baby Graham begins to understand words.

Harry Watson is also a single, stay at home parent to his three year old daughter, Sophie. He’s a free lance writer, and his latest assignment is to find out what telephone sex workers are really like.

But all his preconceived ideas are wrong, wrong, wrong. India Mcbide is nothing like he expected–but very much what he’s dreamed of.

˃˃˃ What’s India to do when a gentleman caller seems to want more than a sexy voice on the telephone?

Is it possible to find the man of her dreams over the telephone?

TREAT YOURSELF TO A FREE ROMANTIC COMEDY FILLED WITH LAUGHTER, LOVE AND COMPLICATIONS