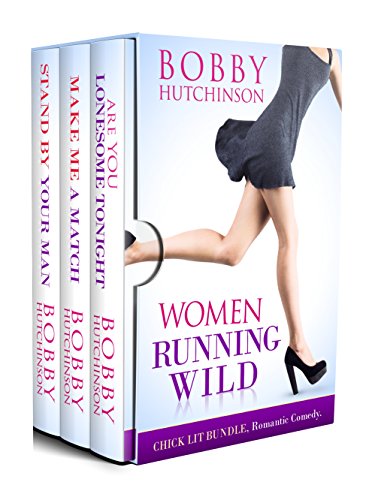 The women in these romances are daring, outrageous, and often laugh out loud funny. They’re also smart and good at what they do.

Left pregnant and penniless by a lying, conniving scoundrel, Maxine Bleckner has found an unorthodox way to support herself and baby Graham. Her alter-ego, India Mcbride, is excellent at phone sex. It pays the bills–at least until baby Graham begins to understand words.

Harry Watson is also a single, stay at home parent to his three year old daughter, Sophie. He’s a free lance writer, and his latest assignment is to find out what telephone sex workers are really like.

What’s India to do when a gentleman caller seems to want more than a sexy voice on the telephone?

STAND BY YOUR MAN–MADDIE’S A PRIVATE DETECTIVE, AND HER SISTER FRANCIE’S IN LOVE WITH A CRIMINAL!

Francie wants Maddie to prove Sebastian’s innocent, but the Seattle Police have proof that he’s guilty.

Sebastian’s brother, Finn, has hired Maddie to find out the truth and set his brother free.

Finn makes Maddie’s blood boil and her bells ring–and she’s truly, madly, deeply in love with his little daughter, Zoe. She’s pretty certain Sebastian is guilty as charged, so she’s trying her best not to find evidence to the contrary. She’s doing the exact opposite of what Finn hired her to do, betraying the guy she’s supposed to be working for, the guy she just might, maybe, almost be falling for because—

Maddie’s parental units, the cop and the judge, want Sebastian safely in jail, and Francie somewhere safe-like a nunnery? And they want Maddie to make it happen.

Can a good honest detective play both ends against the middle without getting hoist on her own petard?

MAKE ME A MATCH–Eric Stewart can’t believe his sisters would stoop so low.

Sexy, dangerous and fancy free, Eric is about to turn forty, and his three sisters think it’s high time he found a good woman and settled down.

Eric can’t believe his meddling sisters have signed him up with the city’s hottest matchmaking agency. The only way to get them a refund is to get himself rejected by every single match. Tessa McBride is working for the matchmaker, and she and Eric have a history. He humiliated her when she was a shy, trusting girl. Well, she’s not anymore.

She vows to prove to Eric that she’s more than a match for his schemes–and show him what he’s been missing all these years.

˃˃˃ Can’t get enough of Janet Evanovitch and Sure Grafton?